To provide sufficient support for a rotating shaft or journal, it is important to choose a hydrodynamic bearing design with the right load capacity. If the applied loads are greater than a bearing design can handle, it can cause excessive wear and instability. With the Rotordynamics Module, an add-on product to the COMSOL Multiphysics® software, you can compare the load capacities for different types of hydrodynamic bearings and determine which one is best suited for your particular application.

From electric motors to steam turbines, hydrodynamic bearings — a type of fluid bearing — provide support to rotors in a variety of industrial applications. Valued for prolonging both the life span and quiet operation of components that rely on them, these bearings are designed to support heavy loads and reduce sliding friction and vibrations through the use of fluids that are pressurized, such as oils or gases. In a hydrodynamic bearing, the pressurization of the fluid takes place through a “pumping effect” promoted by the fast-moving journal, which pumps the fluid through the convergent section of the gap between the journal and the bearing. 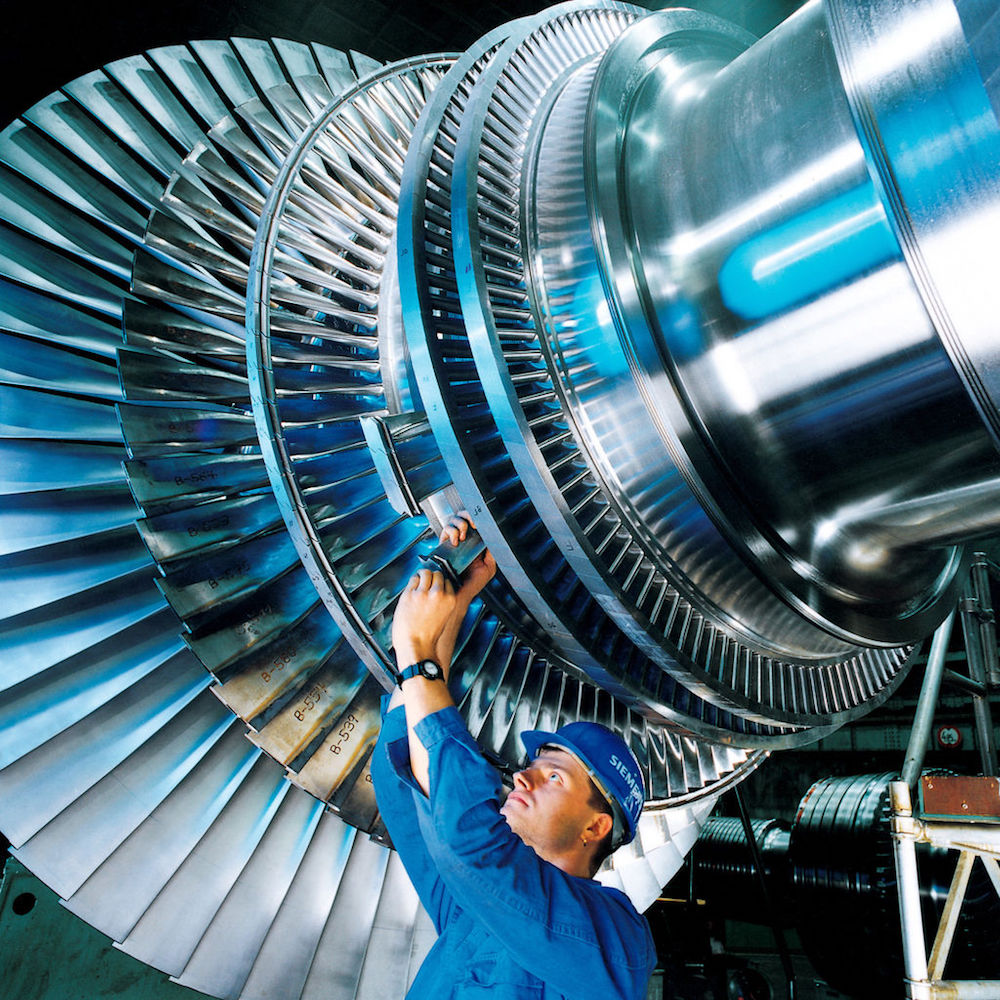 For a hydrodynamic bearing to perform efficiently, its load capacity needs to correlate with the requirements of the application. As such, it is important to understand how different types of hydrodynamic bearings react to loads and use this knowledge to choose the appropriate design. With the Rotordynamics Module, you have access to features and functionality that are needed to perform such analyses.

The first three types include only one configuration. For the multilobe bearings, there are five different configurations, including:

Within the journal bearing, the journals rotate at an angular speed Ω (rad/s). In regards to the static position of the journal, it is obtained in such a way that the net force resulting from the fluid film in the horizontal direction is 0. This same force balances the journal weight W in the vertical direction.

To perform the computation, we need to include the following parameters:

To begin, we can look at the fluid film pressure profile for the different bearing types, in order to get an idea of the pressure distributions. 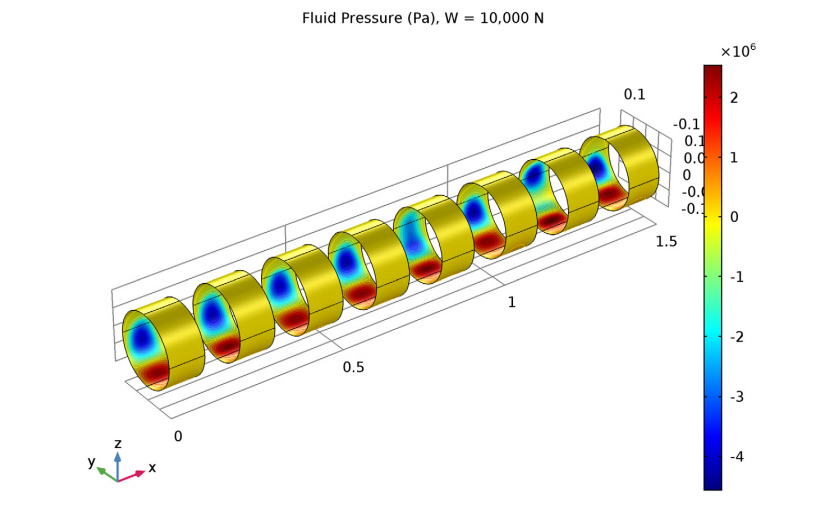 Pressure in the film increases in the convergent section of the film and rapidly decreases in the adjacent divergent section. In order to more easily investigate the results from the 3D plot, let’s look at a 2D plot where the cylindrical surfaces are unwrapped into rectangles. From the below plot, it’s clear that the clearance profile of the bearings has a strong influence on the pressure distribution in the film. 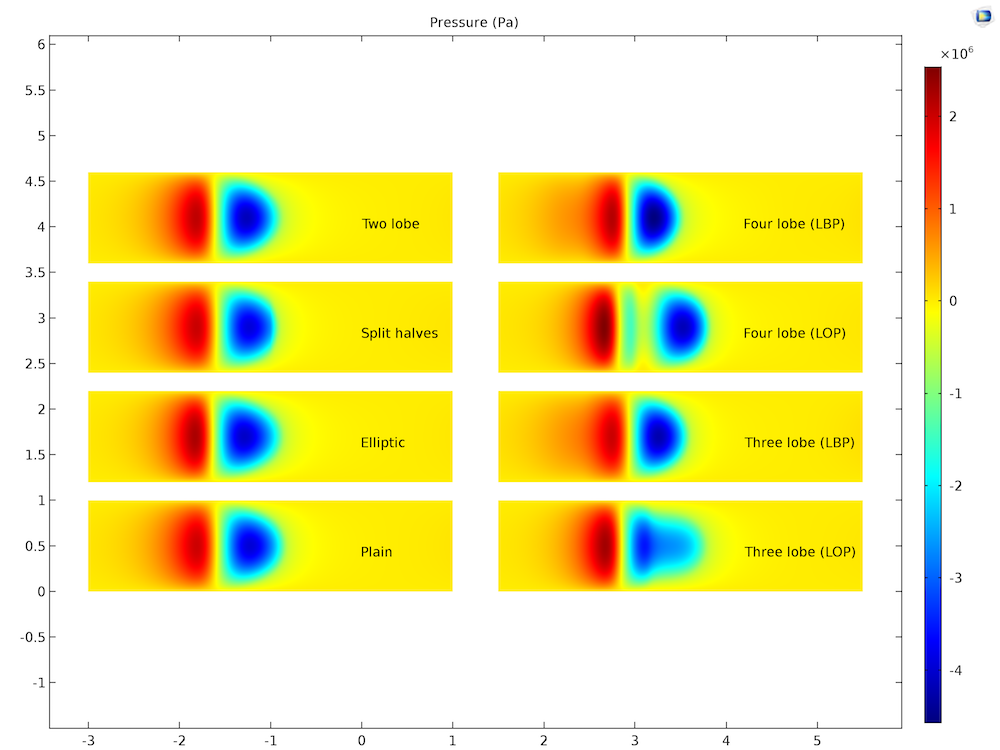 In the next plot, we compare the journal eccentricity to the load. The favorable journals are those that exhibit less eccentricity. The plot shows that the bearings with the optimal eccentricity in the operating range are the split-halves and three-lobe LBP types. In cases where the loads are greater than 5000 N, the four-lobe LOP type has the highest eccentricity, while the four-lobe LBP has the lowest. 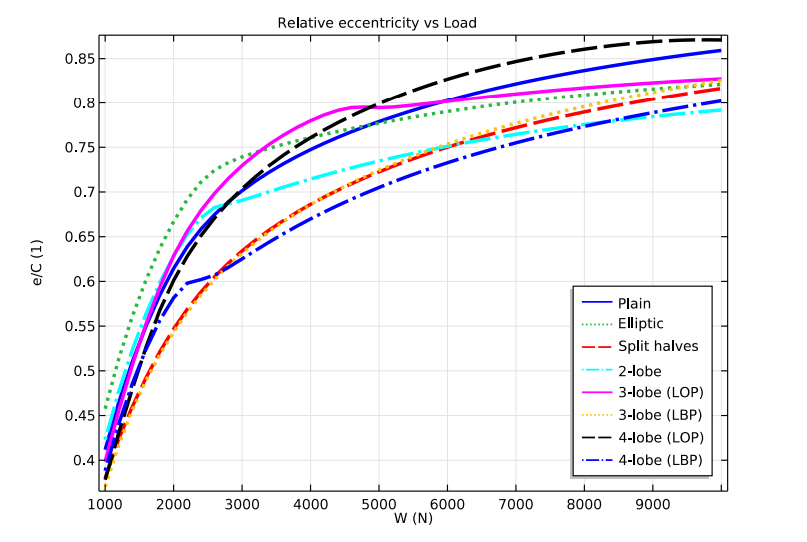 If the load is smaller, there is a tendency for the equilibrium position of the journals to move primarily in the y-direction, with slight movement in the z-direction. When the load is greater, the journals move in the negative z-direction very rapidly. Beyond a threshold load, the journal comes into contact with the bottom part of the bearing. This sets a limit on the load-carrying capacity of the bearings. This curve helps you determine the limiting load that a bearing can withstand for safe operation for a given value of the journal eccentricity. 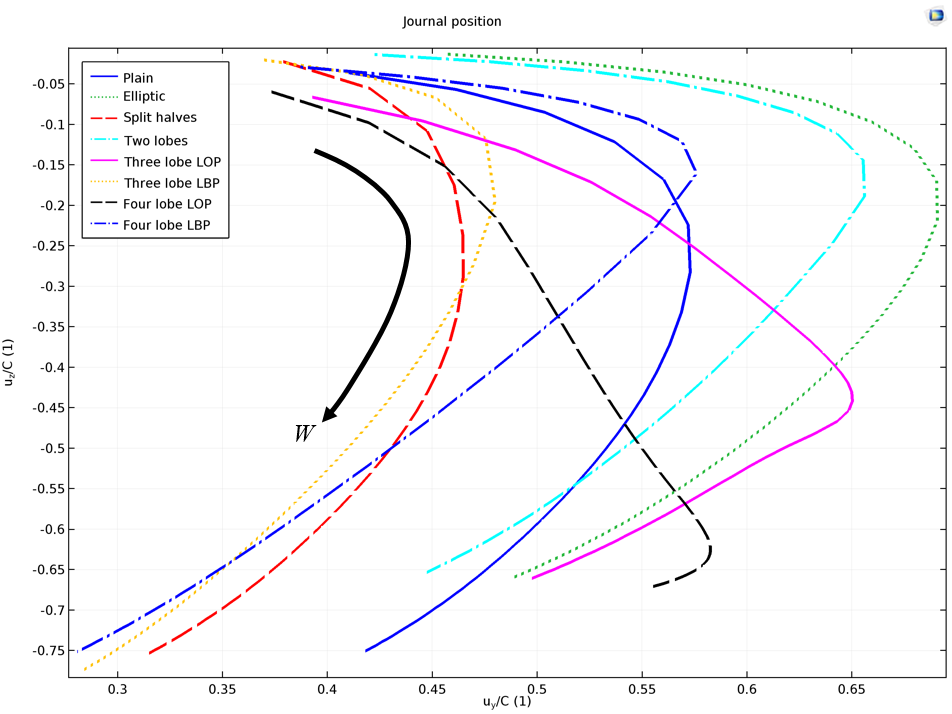 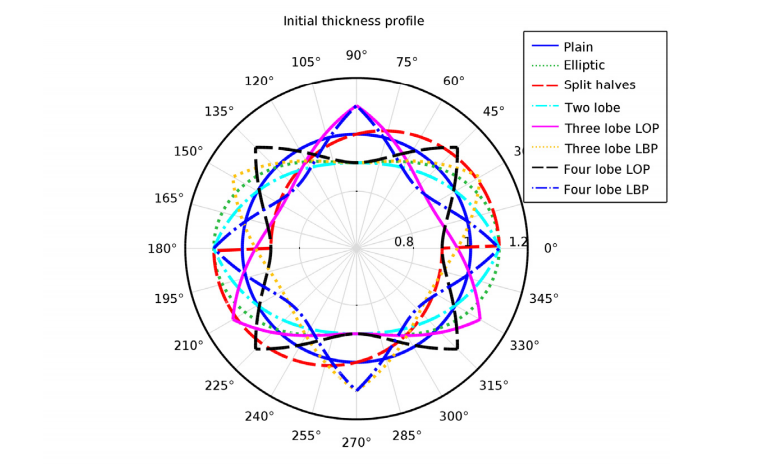 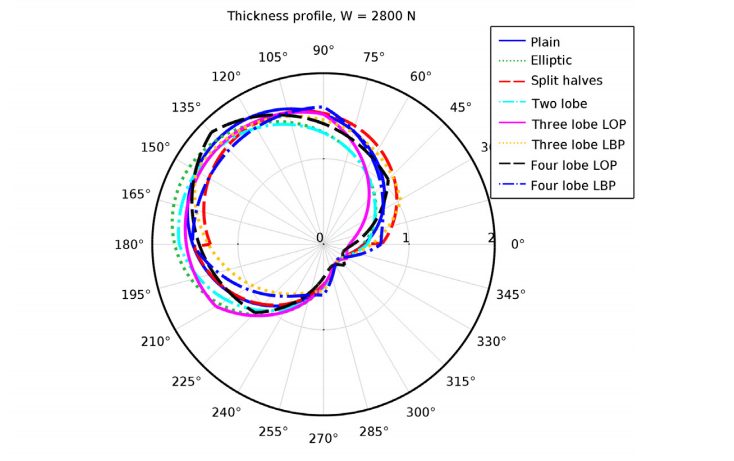 The fluid thickness profile at the reference state (left) and at equilibrium state (right).

You can take this tutorial model for a spin by downloading the .mph file and accompanying documentation from the Application Gallery online. Note that you can also access these files directly within the product via the Application Libraries.

Get the Hydrodynamic Bearing Tutorial

Not yet a COMSOL Multiphysics user? Contact us for a software evaluation.

Take a Closer Look at the Rotordynamics Module

Comparing 2 Shock Response Analyses for a Computer Circuit Board 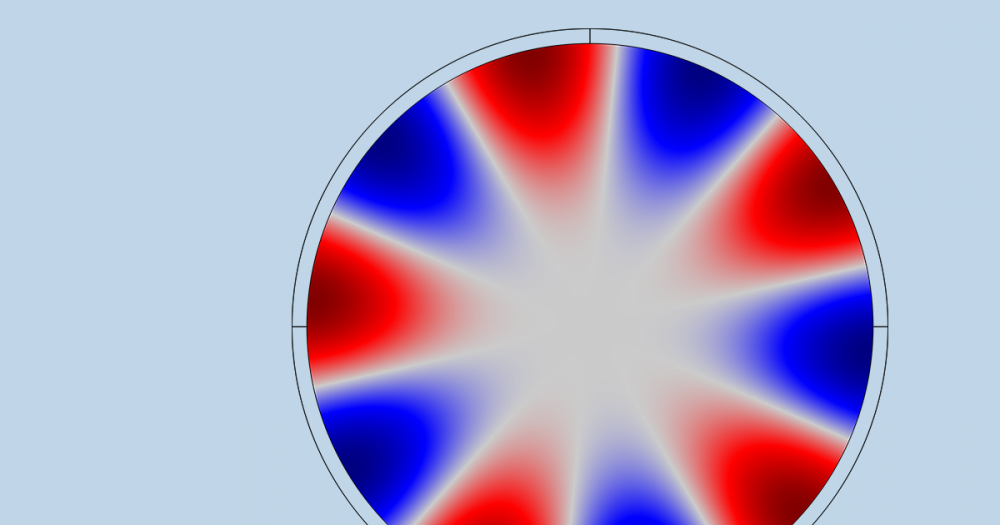 How to Use Dispersion Curves to Analyze Fluid-Filled Pipes